Update 19 July 2014 – Some good news. Information Minister Yaacob Ibrahim has stopped the National Library from destroying two of the children’s titles, specifically ‘And Tango Makes Three’ and ‘The White Swan Express’, issuing the order that they be moved to the adult section instead, where parents can borrow them for their children. However, a third title, ‘Who’s In My Family?’ has sadly already been ‘pulped’.

To read more on this development, click on this link to go to the AFP News article I got the information from, via Yahoo! News Singapore.

I’m deeply disappointed by the news I came across on Yahoo! Singapore that our National Library are going to destroy some children’s books that depict families with gay parents.

Two children’s books ‘And Tango Makes Three‘ and ‘The White Swan Express‘ were removed after a member of the public, a Teo Kai Loon, had e-mailed the National Library Board (NLB) voicing his concerns about them.

… In supposedly two days, NLB responded to Teo’s e-mail complaint, stating that the books have been withdrawn following his feedback. NLB emphasised that it “takes a strong pro-family stand in selecting books for children” and “when library visitors like yourself [Teo] highlight to us any conflicting content within books, we review such books thoroughly and withdraw them from circulation”.

The response was signed by Tay Ai Cheng, the assistant chief executive and chief librarian of the NLB.

A member of the Facebook group “We Are Against Pinkdot in Singapore”, Teo then posted NLB’s response to him on July 8. He did not include the contents of his original e-mail complaint in the post. In the post, Teo called other members of the group to “continue to scrutinise the catalogue and not allow such children books to go under the radar screen”. He also encouraged people to email NLB if they had any concerns, saying that the NLB takes swift action, “all within 2 days”. However, Teo’s Facebook post in the group has since been removed.

That the books are to destroyed, instead of simply being given away to people who want them, which would serve the same objective of not having them on the library’s shelves anymore.

I simply don’t understand why the books must be destroyed. To me this reeks of a book-burning exercise, which is shocking and extreme. As a gay person, heck as any thinking and feeling human being, to me it’s like making a damning statement, in this case against gay parenting and therefore gay people.

I don’t care to ever be a parent myself. And so when I read or hear of condemnation to the idea of gays being parents, I admit it’s something that just whizzes by me as just one of the many injustices that is part of life. But not before it slashes me up inside in tiny painful cuts in ways you will never know or understand, unless like me you are a gay person who grew up with straight parents, in a ‘straight environment’, not to mention religious even, but who still suffered physical and sexual abuse at the hands of people who considered themselves straight, who led straight lives. It happened over a number of years in my childhood.

I’m not traumatised anymore, I function alright. But to be a grown adult already in my 40s and still be weighed down with malaise and sorrow by vivid memories of those episodes that still hit me out of the blue every so often, there is always a bitter smile or laugh in me when I read or hear ignorant and prejudiced people thinking that the safe wellbeing of children depends on whether the parents are gay or straight.

Anyway, whatever, these are just my own scars, from my own experience of my own childhood, which of course also contains happy memories as well. The opinion I want to express here is just that: if we don’t agree with something, that’s fine, but why to the harsh extent of ‘pulping’ such books that are sympathetic to what we don’t agree with?

And what a sad waste of books and money too. I wish they would just give them away to the adults who want them.

My sadness and disappointment stems mostly from that I was very fond of our National Library. I have always loved it and never took this noble public service for granted, even before I started travelling especially to some of our neighbouring countries, where even the most basic public infrastructure like proper pedestrian pavements can be messed up, let alone luxuries like public libraries which are practically non-existent. (After travelling, I consider our libraries a luxury.) I think I have mentioned in this blog a few times how I love and appreciate our National Library, for example in this post here.

Hence the deep disappointment. Now It’s like the love is suddenly tainted or something. It’s like now I feel I might have to reluctantly let go a friend I’m actually fond of. Because how do you remain friends with someone you can’t respect.

The books in question:

The three titles to be pulped are:

1. And Tango Makes Three, (2005) written by Peter Parnell and Justin Richardson and illustrated by Henry Cole. 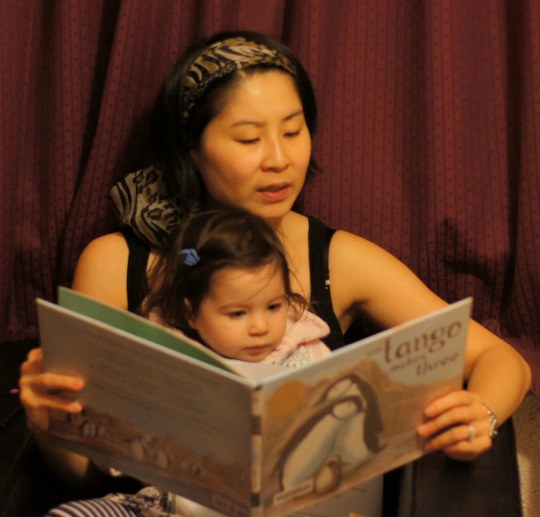 A photograph of parent and blogger Joyce reading ‘And Tango Makes Three‘ to her daughter. Added here 14 July 2014, with her kind permission. From the excellent review of the book from her family blog TOT: HOT OR NOT. Click image to go there.

The book is based on the true story of Roy and Silo, two male Chinstrap Penguins in New York’s Central Park Zoo. The book follows the six years of their life when they formed a couple and were given an egg to raise.

The book has won many awards but also been at the center of numerous censorship and culture war debates on same-sex marriage, adoption, and homosexuality in animals. The American Library Association reports that And Tango Makes Three was the most challenged book of 2006 to 2010, except for 2009 when it was the second most challenged.

The following video is a wonderful narration of the moving story, from YouTube user John Mark Johnson.

2. The White Swan Express: A Story About Adoption (2002), written by Jean Davies Okimoto and Elaine M. Aoki, illustrated by Meilo So. 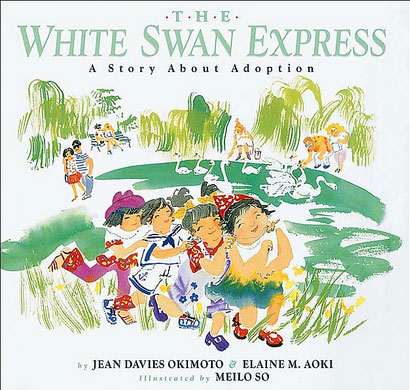 Image as seen on The Online Citizen. Click image to go there.

The story is about children adopted by straight, gay, mixed-race and single parents. A description as seen on Amazon.com:

In China, the moon shines on four baby girls, fast asleep in an orphanage. Far away in North America, the sun rises over four homes as the people who live there get ready to start a long, exciting journey. This lovely story of people who travel to China to be united with their daughters describes the adoption process step by step and the anxiety, suspense, and delight of becoming a family. Told with tenderness and humor, and enlivened by joyous illustrations, The White Swan Express will go straight to readers’ hearts.

Click here for a sweet and delightful review of the book.

3. Who’s In My Family?: All About Our Families (2012), written by Robie H. Harris, and illustrated by Nadine Bernard Westcott. 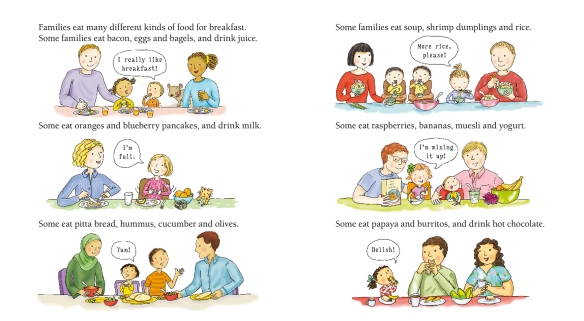 An image from the book ‘Who’s In My Family?’, as seen on walker.co.uk, via Google Image Search. Click to go there.

A description of the book from Goodreads.com:

Trusted New York Times best-selling author Robie H. Harris continues her series for preschoolers with a look at the many kinds of families that make up our world.

Join Nellie and Gus and their family — plus all manner of other families — for a day at the zoo, where they see animal families galore! To top off their day, Nellie and Gus invite friends and relatives for a fun dinner at home. Accessible, humorous, and full of charming illustrations depicting families of many configurations, this engaging story interweaves conversations between the siblings and a matter-of-fact text, making it clear to every child that whoever makes up your family, it is perfectly normal — and totally wonderful

Click here for a review of the book. And here to go to the website of the author Robie H. Harris.

Some of the voices defending the books:

As I’ve written before once or twice, I’ve been meaning to write here about how much I love and appreciate being able to reserve online the books I want to borrow from the National Library. I’m finally sitting down and doing this with my latest reservation, Labyrinth by Kate Mosse, a title reviewed and highly recommended by Buffy of Storytime With Buffy, a blog I follow.

I thought I would show my appreciation of this wonderful service I’m fond of using by going through it step-by-step à la a tutorial of some sort.

Before I go any further, I should mention it costs $1.55, and that it’s not payable by cash. Transactions at the library are only by CashCard, ezlink card or NETS. 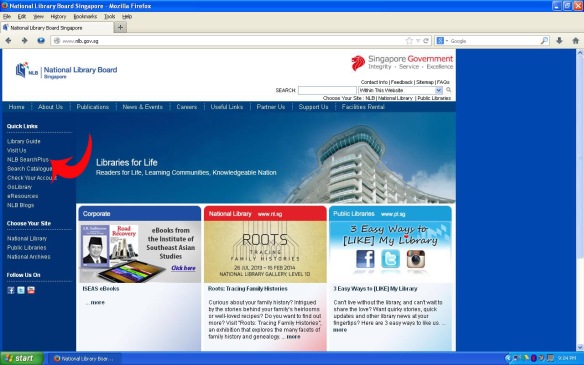 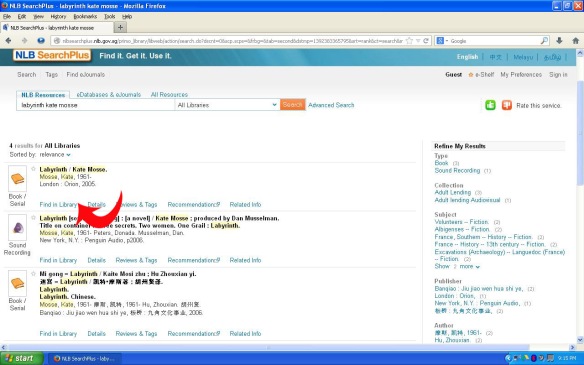 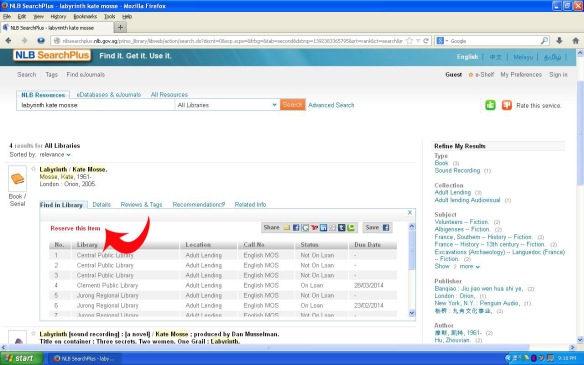 At this point, if you see it’s available, you might decide to just pop in the branch as soon as possible to pick up the book. Bear in mind someone may have already borrowed it by the time you get there. (Especially if it’s a recent and popular bestseller!) Also, if it is not available at the library nearest to you and you decide to travel to a farther one to borrow it, remember you have to return the book at the same branch you borrowed it from. 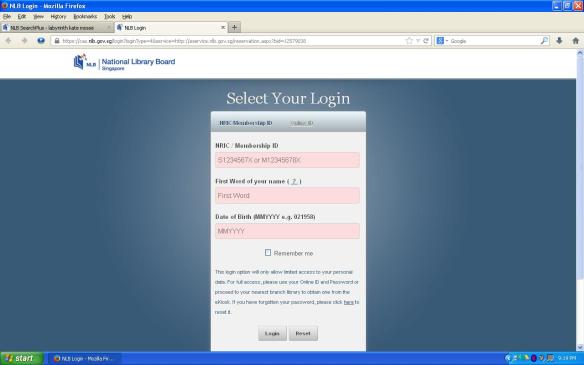 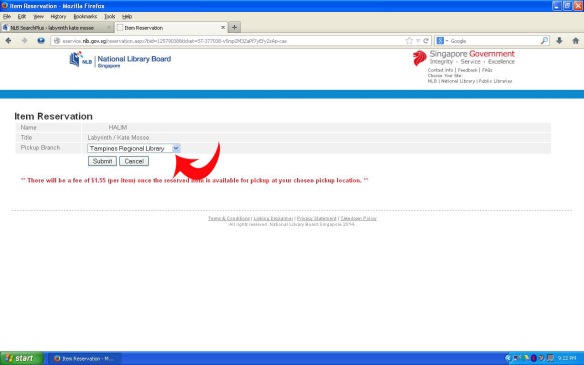 Picking up the reserved book. 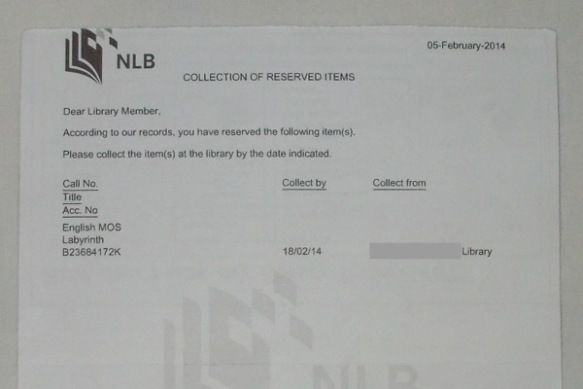 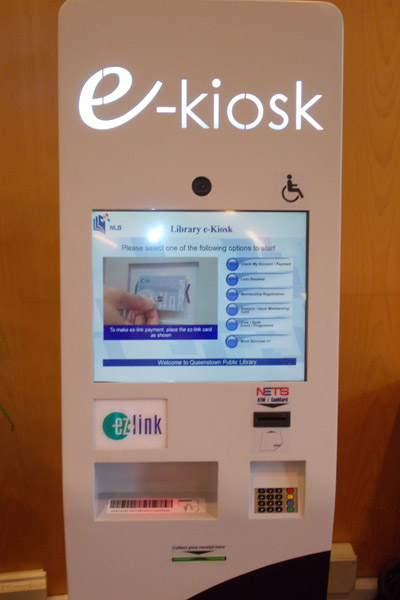 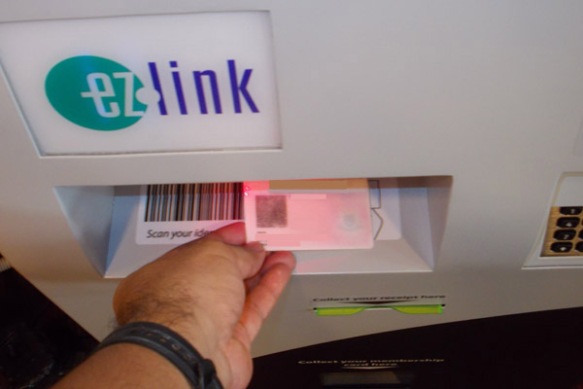 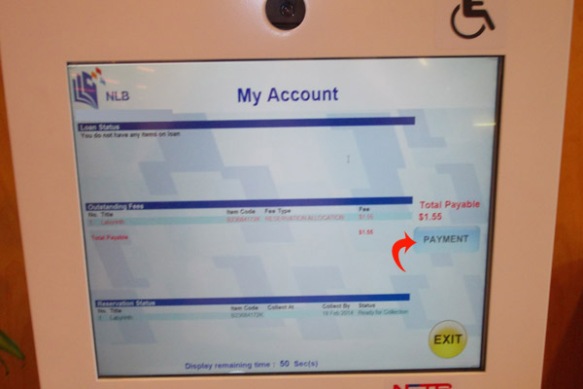 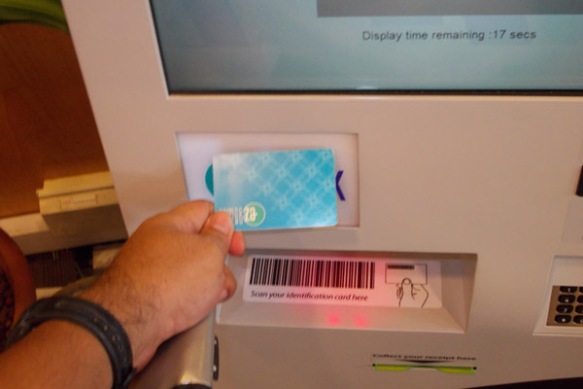 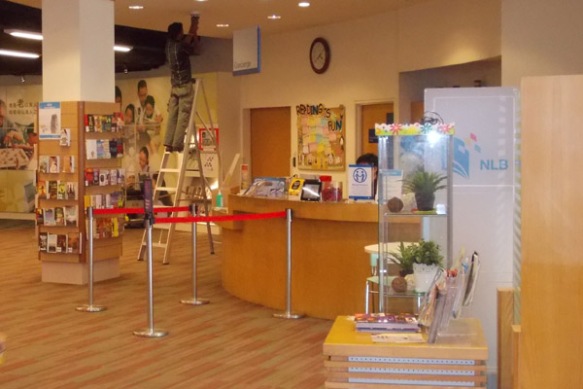 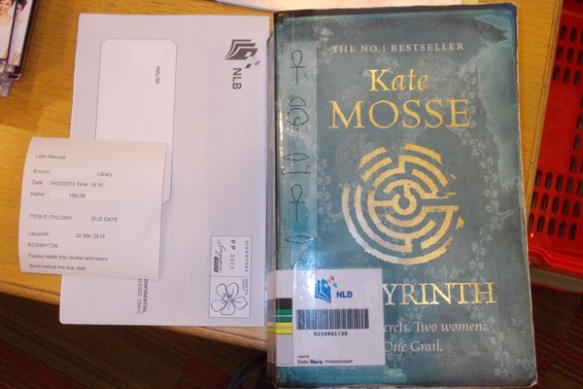 Mmmm… can’t wait to be spellbound.

Happy meter: ready and excited for the freefall down the rabbit hole.

Over a week ago, in my haste to reserve a book online from the National Library (a thing of joy I definitely want to document as part of my ‘100 Happy Days‘ adventure) I had clicked to reserve a ‘Large Print‘ book, and I didn’t realise this until I went to collect it a few days ago. 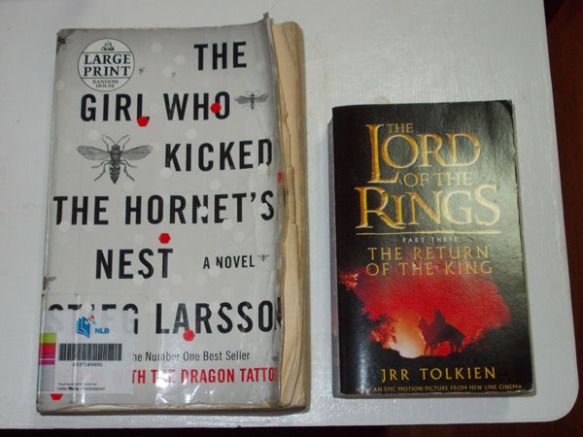 The large-print book compared to a regular-sized paperback.

“Oh no,” was my first thought when I saw it, “I can’t bring it out with me. It’s too big.” I was so annoyed with myself, because reading on the train or bus makes the ride far less boring. I don’t get to read when it’s really packed and we’re all squeezed in like sardines, but when I get the chance it’s always nice to catch up on my reading.

I’m reluctant to bring this out because in addition to its cumbersome size, it’s a tad heavy to carry it for long with one hand while I flip the pages or hold on to a pole with the other. I don’t know how thick Stieg Larsson’s The Girl Who Kicked The Hornet’s Nest is as a regular paperback, but in this large print format it’s just over 900 pages.

But when I started reading it, oh my God, I immediately loved the large print. It made me smile at first because I’m reminded of children’s books with their big text. But I quickly got into the flow of the story, and it’s a wonderfully comfortable experience for my eyes. I hardly feel the strain after reading for a long while. 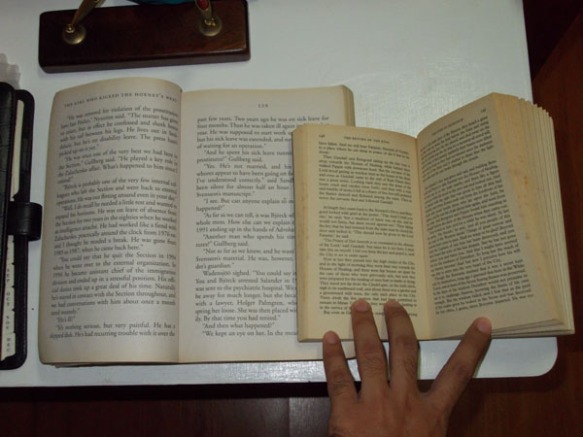 Comparison in font size and spacing between lines.

I don’t know if I will intentionally borrow a large-print book in future, but it’s so nice to know our National Library has made them available. It’s gratifying that seniors and other people with weakening eyesight have the option to enjoy these books anytime they want.