I came across again after such a long time, the song ‘Sing It Back’ from Moloko, on YouTube. It was first released more than two decades ago in 1998. I was in my 20s then. Listening to it again now, I thought to myself, “Wow, I remember this song, it still sounds fantastic after all these years.” Not everything in pop culture like songs and movies age well.

So that quickly led to a jaunt down memory lane, which can be dangerous on YouTube because it can suck up hours on end, so I had to be careful to snap out of it after around half an hour or so. But it was fun idling there, tickled pink by some of the other songs I liked so long ago.

Among the other videos I watched is ‘The Time is Now’, also by Moloko, enjoying the song all over again.

While I was listening to the song I read some of the comments, and one said:

Moloko still never got as much attention as they deserved. She is a wonderful singer.

I didn’t notice the ‘they‘ and was thinking, “Totally agree with that. Well, you can not let that happen to the current crop of talented but under-rated singers, by giving them more attention.

Start with this girl Róisín Murphy I saw a couple of times on YouTube. She’s amazing, and hmmm, incidentally she reminds me a lot of Moloko, come to think of it.”

In fact, I quickly realized that in the video for ‘Narcissus’ above, she sounds, and looks, a lot like Moloko in the ‘Sing it Back’ video. And both the songs and both the videos have a great sense of fun and humour.

The more I watched and listened to both, the more I’m intrigued by the similarity, until finally I Googled “Róisín Murphy Moloko” to see if anyone else noticed it. And of course that’s when I found out they’re actually the same person, haha. *light facepalm*

Or rather, the lady is the same. Róisín Murphy is her name. Moloko however is the name of a musical duo, made up of Róisín and her former partner Mark Brydon, that was active between 1994 and 2004.

I was really surprised they were not two different people because it meant she hardly aged, to look really similar to her younger self of 1998, even after two decades. Maybe she’s a vampire or something, I don’t know, (a disco-dancing booty-shaking one) but the face and the body are practically identical.

I also find it so incredibly cool that she’s still singing, and with the same vibe and spirit. Obviously I can’t call myself a fan as I didn’t even know she’s the same person as the singer in Moloko, but I think it’s so great she’s still going strong, doing her thing, putting out entertaining songs still and such fun and humorous videos.

Like this one called ‘Overpowered’, for example. Her outfit immediately made me think of Lady Gaga’s crazy outfits, but this was from 2007, before Lady Gaga’s first single was released the following year.

I really should start listening and enjoying Róisín’s discography and check out her past albums. 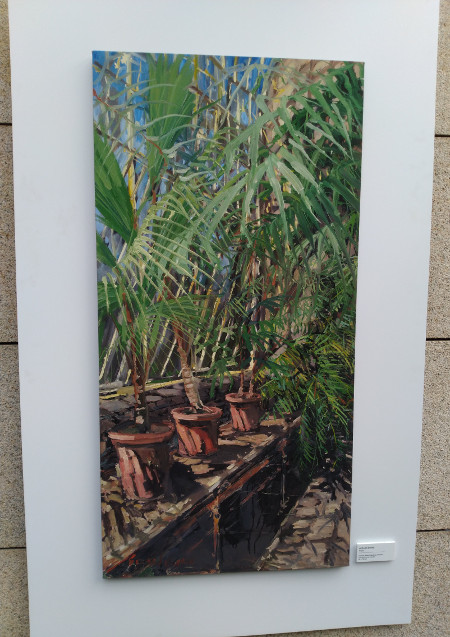 The artist is a Gerard Byrne from Ireland. I’ve never heard of him because I don’t ‘follow’ art, but I absolutely love the joy and life in the six works I saw. There is an exhibition of his works called Botanical Fusion ongoing at the Botanic Gardens across 3 locations, one of which is the Bukit Timah Gate I mentioned above, since 6th September until 10th November.

Botanical Fusion is a series of works painted by GERARD BYRNE, a Dublin born artist who is one of Ireland’s leading contemporary artists; of modern impressionist style.Titled Botanical Fusion, this is birthed from an artist-in-residence partnership with the Singapore Botanic Gardens and Gerard Byrne, supported by Embassy of Ireland. 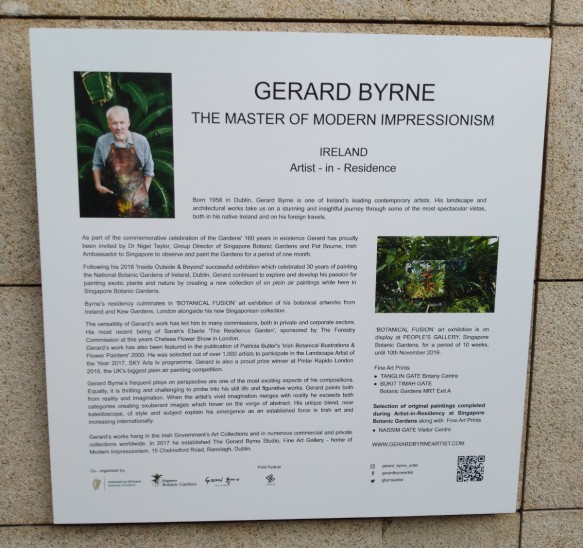 I thought “Damn, how daring to display these paintings outside the garden grounds, along a public walkway, unguarded. What if they are stolen or vandalized?” Or, you know, just touched and generally handled by itchy, oily, sweaty fingers. It turned out they are prints, according to the labels. Still, though. I hope no harm comes to them.

According to the same webpage linked above, a selection of the original paintings completed during the artist’s residency can be viewed at the Nassim Gate Visitor Centre of the gardens. 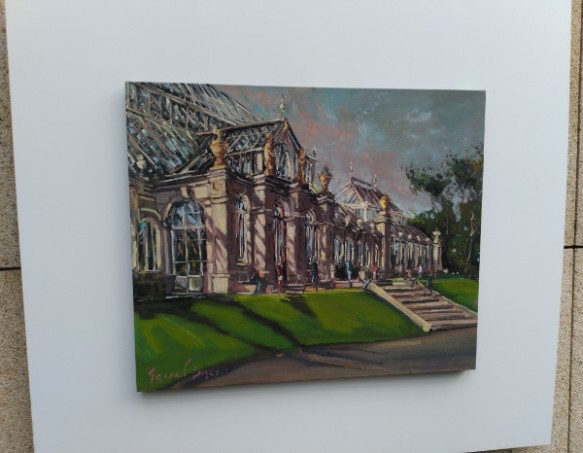 I don’t know what this one is called because there was no info label I could see. Maybe it dropped to the ground and got lost or something. So very pretty. I especially love the sky depicted. 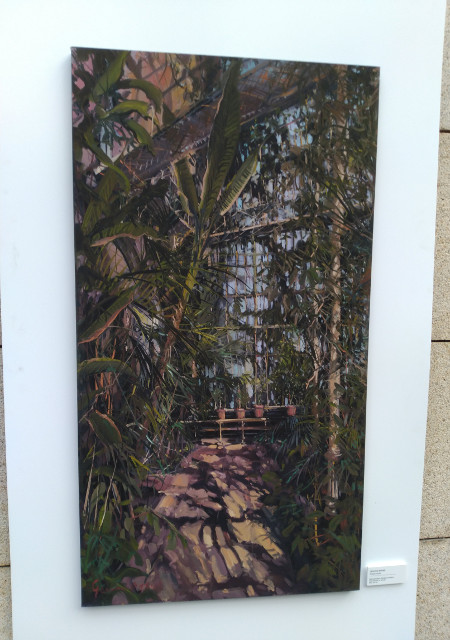 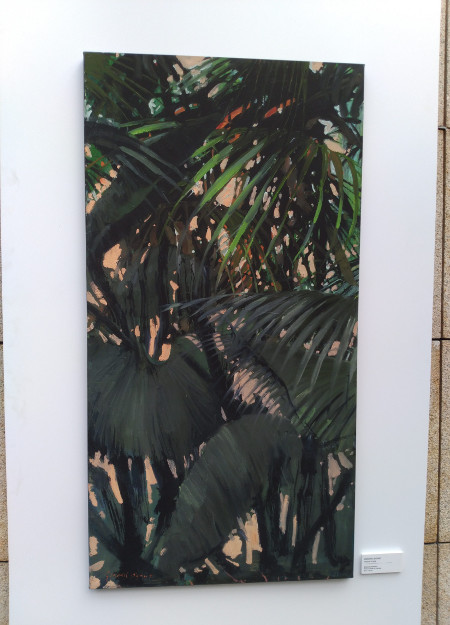 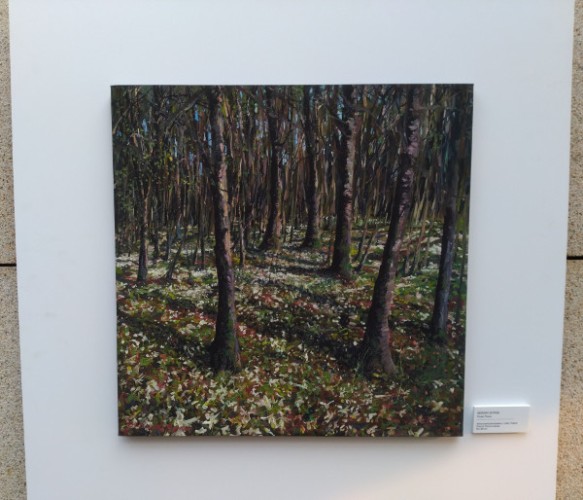 Forest Flower above is easily my favourite among the six works exhibited at that Bukit Timah Gate location. So stunningly beautiful, and it reminds me of some of my favourite paintings by Gustav Klimt, the Austrian painter known for The Kiss and many other works.  I just love the company of trees. 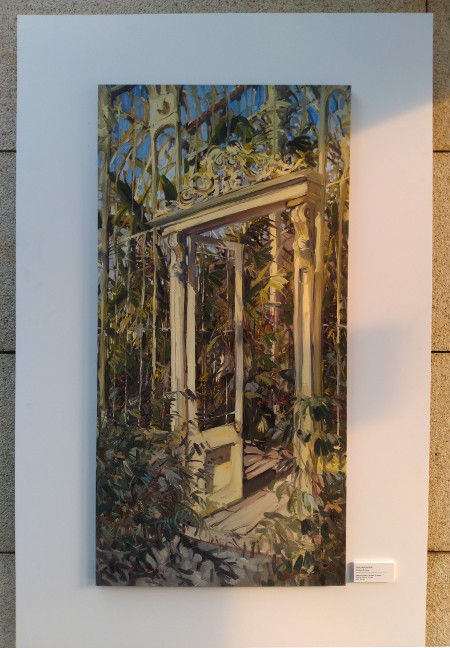 Definitely have to go back soon to see the other works exhibited at the other two locations in the Botanic Gardens.