On the drive back from a long weekend trip to the resort town of Port Dickson, my brother and sister-in-law very kindly decided to stop by the historical city of Malacca for Bert’s benefit as he had never been there before, and to grab lunch. We only had a few hours, so we only caught glimpses of three sights very quickly: the A Famosa Fort, the Malacca Sultanate Palace, and the Independence Monument Museum.

I’ll post pictures someday, probably when we have returned there to visit it ‘properly’, as Malacca is a very interesting city-state. One of the smallest states in Malaysia, but one of the most fascinating as it is rich in history and culture. It is in fact dubbed ‘The Historic State‘ and is a UNESCO World Heritage Site with Penang’s George Town.

Damn, wrong intro. After mentioning history and culture, all I’m going to show now are pictures from a shopping mall. Haha, sorry. 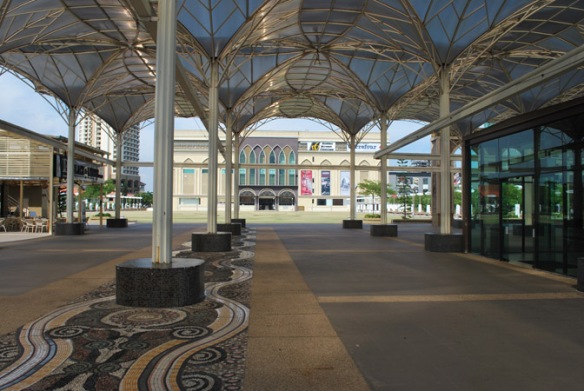 Oh well, it’s just that, across where we ate was this mall with a lot of arts and crafts stalls. After visiting those, we went outside of one of the upper floors for a breather and there was this gorgeous mosaic work featuring what look like pebble stones. And that’s what I want to feature in this post, this really beautiful (to me) and large mosaic work.

A sculpture seen at Raffles Place. I like how it uses a popular toy item to relay its idea. After some checking online, I found that this type of panel of components is called a sprue, thanks to this post.

What I like about it is the void at the bottom left where there’s a dedicated space for two persons to stand, to be part of the sculpture. I thought that was a cute touch.

A tourist friend who had visited several times and passed by the area many times was again in town recently. He was excited when he thought he spotted something new as we were strolling around Boat Quay. I told him the cute sculptures of the cats have been there for some time, but I was happy to see his face all lit up and be part of his joy as he regarded the bronze cats with wonder and amusement.

According to the ‘properties’ of this digital shot, I had taken this photo in March 2004.

So it’s been exactly ten years since I last said hi. This one was taken about a week ago.

I love this cute fat bird, with its Boterismo proportions and its little beady eyes. It may look serious and uncomfortable, tense even, but it still has an irresistable air of whimsy that puts a smile on my face whenever I walk past it.

Fernando Botero Angulo (born 19 April 1932) is a figurative artist and sculptor from Medellín, Colombia. His signature style, also known as “Boterismo”, depicts people and figures in large, exaggerated volume, which can represent political criticism or humor, depending on the piece. He is considered the most recognized and quoted living artist from Latin America, and his art can be found in highly visible places around the world, such as Park Avenue in New York City and the Champs Elysées in Paris.

This image is from Wikipedia, by the user ‘Jonatancarvajal’, and captioned “Botero Plaza in his hometown of Medellín is a popular tourist site for taking pictures.” Click image to go to source.

I saw the above artwork at City Square Mall. I’m a fan of such work. Some time ago, I came across pictures of chalkboard art online and immediately fell in love with them. I find them fascinating, because they can be so ornate and obviously require a high level of artistry, and yet have a down-to-earth tone to them, I guess because we associate chalkboards with childhood and school.

Another thing about them I find interesting is how strong and ‘masculine’ it looks to me even when the piece features intricate calligraphy which can be very frilly. I think this is due to the art being in stark black and white.

It was a very nice surprise coming face to face with this painting a few days ago at the National Museum. It is part of the ‘A Changed World‘ exhibition ongoing there until this Sunday.

I was introduced to the artist Liu Kang while taking some night classes in graphic design about ten years ago, and art was one of the subjects. To be honest I didn’t even know of this exhibition. I was just at the Museum with a friend, saw the posters for this, remarked “that looks interesting.” so we went down to the basement where it was located to check it out. It was therefore an unexpected treat to see it.

A bit about the artist from Wikipedia:

Liu Kang (Chinese: 刘抗; pinyin: Liú Kàng) was a Singaporean artist famous for his Balinese-themed figurative paintings. He was a founding member of the Singapore Art Society, and was credited with developing the Nanyang Style.

He was born in Fujian Province and he spent his early years in Malaysia, studied art in Shanghai and Paris, and taught art in Shanghai during the 1930s. Under the influence of Chinese artist and art teacher Liu Haisu (1896–1994), Liu admired, and often appropriated the styles of French-based modernist painters such as Cézanne, van Gogh and Matisse.

Liu Kang came to Singapore in 1942 and had been credited with numerous contributions to the local arts scene. In 1952, Liu Kang, Chen Chong Swee, Chen Wen Hsi and Cheong Soo Pieng went on their historic field trip to Bali in search of a visual expression that was Southeast Asian. Liu drew much inspiration from this trip which inspired some of his latter works.

In 1970, Liu was awarded the Public Service Star by the Singapore Government. He was honoured by the same agency in 1996 with the Meritorious Service Medal. His works, spanning from 1935 to 1997, are a testament of his contributions to Singapore art.

This colourful sculpture is found in front of Plaza Singapura. Everytime I look at it I’m reminded of Keith Haring, one of my favourite artists. 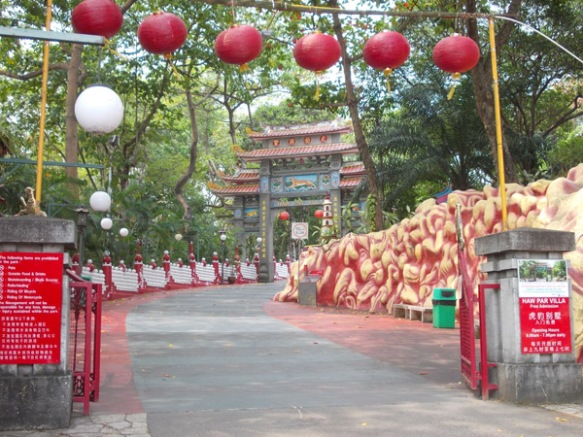 I have fond memories of the theme park Haw Par Villa from my childhood. There used to be a kampung (village) right behind the theme park where my aunt and her family lived. My family would visit sometimes especially when my late grandmother was staying with her. We would make our way through the park first because there was a side entrance from it that led to the village.

I took my Swiss tourist friend for a walk there for a couple of hours before we headed to Harbour Front. There is now an MRT station there since 2011, named after it and located right beside the entrance of the park.

It’s a bit run down, but there obviously is still effort at restoration. Most of the paint on the statues look fresh, or at least still looks good, and we could see some ongoing restoration works there. But it still looks like considerable work needs to be done to polish it up better, especially water features like ponds, and the signs explaining the stories, many of which are faded. Remarkably, entrance is still free. I’d rather there be a nominal fee (like Sentosa Island’s S$1 entrance fee if you walk there instead of taking the monorail) if it could help with better maintenance, or at least the relevant park authorities contribute the funds and manpower for this. 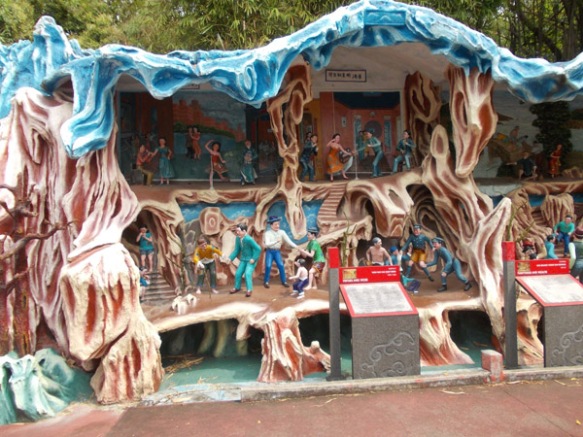 Whatever it is, I hope it’ll always be around because it’s part of our country’s heritage. Even if it’s not profitable, it should be maintained well as it’s a historical venue, like a museum. And museums are never profitable, right? But we always still have museums because they are a necessity, to preserve our history, or at least the history as written by the writers or whatever.

The park was built in 1937 by the Burmese-Chinese brothers Aw Boon Haw and Aw Boon Par, the developers of Tiger Balm, as a venue for teaching traditional Chinese values. That’s before World War 2, and pretty old at least in terms of the young age of our nation.

Me, I just like it a lot because I find it so fascinating and unique. An entire park made up of artistic statues, and not only that, but they tell stories of legends and folklore.

I was at Sentosa Island today taking a walk with a Swiss tourist friend. He made an observation that there are so many signs around. What to do, what not to do, this is allowed, that is not allowed. So many rules. It feels a bit like a nanny state where the people are not trusted to do the right thing, or not trusted to use their common sense, so they have everything spelt out for them.

And while talking about that, he mentioned he noticed that when he waits for a train at an MRT station, there are many announcements blaring from the speakers. Give way to alighting passengers! No eating! Report suspicious people and articles! I laughed because it’s true. There are many announcements, and I think most times they come in all four official languages, so yes sometimes it can seem a bit much and annoying.

The discussion of this subject started when we were at Sentosa because we were taking photographs at what looks like this Gaudi-inspired place near the Merlion, and he remarked the following pesky “Please do not enter the pool” sign spoils the view and photo-taking. The same sign was at various points along the whole stretch of the sculpture and water feature. 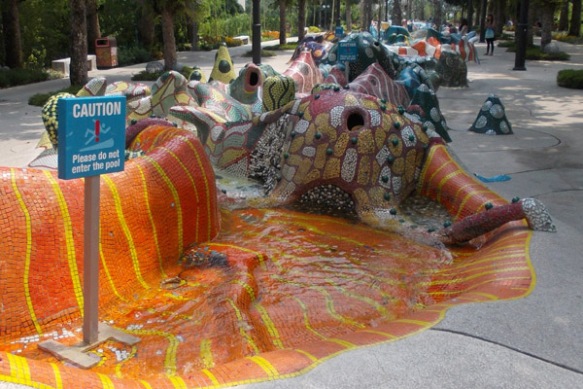 I had to laugh and agree with him. At first glance it looks silly. Who on earth would jump into the fountain? But we later decided there would be people crazy enough to jump in and play, kids and adults alike, including to pose for photos. It may look harmless but people may forget it takes just one slip on the wet slippery tiles to knock one’s head against the surface and that’s it. Nasty bruises, if not a lot worse. I’ve actually been there a few times and I recall the signs not being there before, so I won’t be surprised if they were put there after accidents had actually happened. So, it’s ugly, but safety before aesthetic, I guess. Just that it’s a pity that it’s necessary, if really so.

Two of the other signs we came across.

I guess some admin staff of Sentosa could have felt the same way too about the signs and made an attempt at a sense of humour with these. I didn’t find them very funny, but they did draw out a smile and a sad chuckle from me.

I’ve seen pictures of this gorgeous bridge and been wanting to visit it for the longest time. Now I’ve finally had the joy of seeing it in person and crossing it. It’s truly a remarkable thing of beauty. 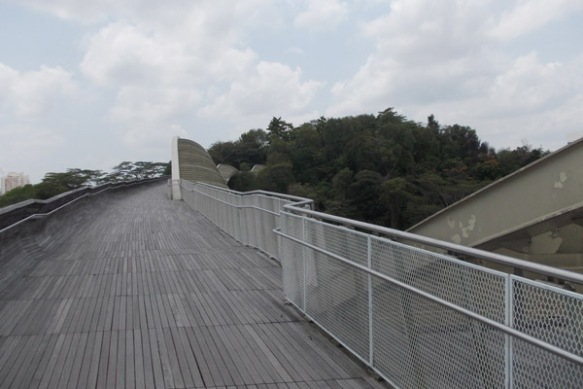