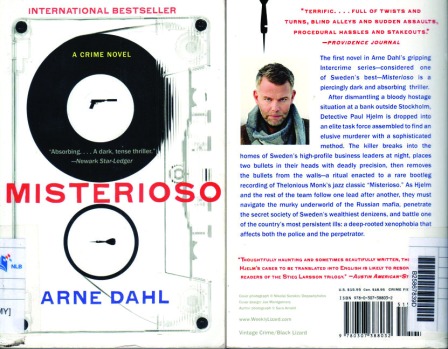 I have not read The Girl with the Dragon Tattoo by the late Swedish author and journalist Stieg Larsson or the other two novels from his hugely famous Millennium series trilogy, although I have seen the Swedish film adaptation of all three books, and thoroughly enjoyed them. Misterioso by Arne Dahl is also a Swedish crime thriller, originally published in 1999. The English version I read had been translated from the Swedish by Tiina Nunnally and published in 2011.

Set in the 1990s, the criminal in the story is a serial killer who targets high-profile businessmen in Stockholm. He breaks into their homes at night, waits patiently for them to get home and shoots two bullets into their heads. Detective Paul Hjelm is enlisted into an investigative team called the A-Unit, just as he was about to be fired or demoted due to a disciplinary committee’s unhappiness at how he handled a hostage situation involving an immigrant, despite the obvious courage and compassion Hjelm had displayed in that incident. The A-Unit had been specially and swiftly set up to investigate the murders, a small but elite team made up of experienced and highly skilled officers selected from all over Sweden.

The book starts off promisingly with what seems to be a bank robbery gone wrong, and then an interesting and likeable protagonist is created in Paul Hjelm, a dependable professional with a cool head. But I started getting a little bored and fidgety after about 80 pages of the 340-page book, reading about Hjelm and the other detectives pursuing false leads, even though there are well crafted and finely paced red herrings. I did enjoy the juicy bits for example when the murder victims are revealed to be less than honourable men, although it would had been nicer if the part about some of them being secret society members came with some entertainingly scandalous revelations. However the part about one of the detectives falling into the hands of the Russian mafia was spine-tingling.

Overall, I didn’t quite enjoy this book. I don’t know, maybe this type of fiction just isn’t my thing, but then I do remember I have read a few other crime mysteries and enjoyed them. I can’t really put a finger on why this book just didn’t click for me. Maybe it’s because I can’t quite root for the hero, or any other character in the book. I do like Paul Hjelm and I think just the right amount of detail is revealed about his personal family, his wife and kids. After all this is a thriller, not a drama about his family. But one problem for me here is that Hjelm is written as having serious friction is his relationship with his wife. Quite a lot of verses are invested in this, yet it doesn’t reveal satisfactorily the cause, and the development of this side story is frustrating. So it just seemed meaningless. If it was supposed to illustrate something about Hjelm’s character, well it was lost on me.

And that stupid zit on his cheek. *Spoiler Alert – for this paragraph* Gosh that was a major peeve for me. Its mention was scattered throughout the book and kept brief, but in such dark mysterious tones that at one point I thought it was going to take on supernatural proportions or something. I was all prepared, and feeling a bit scared for him, for the thing to turn into something really bad. To mean something; to culminate into something worthwhile of the steady suspense built up for it. But in the end it turned out to be just a blemish mark, that’s all. Ugh.

What did I enjoy? The descriptions of the the weather and the scenery in Sweden are concise and starkly beautiful, and the way the words are weaved to describe the music favoured by the killer is nothing short of breathtaking. A gorgeous symphony in itself. Social issues Sweden faces (or faced? Story was set in the 90s.) are also touched in an interesting and informative way. There are a lot of interesting supporting characters. The ones I like best are Hjelm’s boss Jan-Olov Hultin, whose dialogue in my mind was inhabited by Anthony Hopkins (which makes the character more entertaining), and fellow A-Unit team member Kerstin Holm, who matches Hjelm in temperament and is even better than him in some ways as a detective.

4 thoughts on “Misterioso by Arne Dahl”