I read on Makansutra (via Yahoo!Singapore) last week that VeganBurg opened a new outlet at Marina Bay Financial Centre. But of course that’s not the main reason why I’m putting that news here. It’s more for the eye candy pictured below.

Certainly the above attraction reminds me of the store openings of Abercrombie & Fitch stores, like the one in Hongkong I recently noted here. But unlike A&F, there was a girl model as well to greet visitors, although she was modestly dressed. As Makansutra’s writer Catherine Ling noted, her outfit was ‘tame even by Singapore standards’.

I too was thinking of the lettuce bikinis from PETA, like in the photo below.

But as Ms. Ling wrote:

However VeganBurg denies that their campaign was inspired by the PETA “Lettuce Ladies” who wore lettuce leaf bikinis to promote veganism.

“No, we’re not trying to force people into vegetarianism,” says their spokesperson Katrina Lugartos. “We just want people to give something new a try, if they haven’t tried it before. Even eating vegan just once a week is fine.”

I don’t understand that. Personally I don’t see anything wrong with taking a leaf from the Lettuce Ladies idea, and how doing so would indicate trying to force people into vegetarianism. Oh well.

As for VeganBurg itself, I have tried it, I’m happy to say. Because I’m an ‘aspiring vegetarian’ LOL. Like since forever. It’s so damn hard! Nah, that’s just an excuse. Another excuse is that my partner is such an excellent cook and he cooks pretty often and he’s a hardcore omnivore. But when I eat alone it’s almost always vegetarian.

Anyway some months ago I came across its logo or advert I think while looking at the website of the Vegetarian Association of Singapore, and I was immediately curious and excited about it. A vegan burger joint, wow! In early April I dragged my partner to try it. We went to the one at Raffles Place, at the building called Golden Shoe Carpark.

That branch at the Golden Shoe Carpark is not exactly easy to spot. Look out for this signboard. Photo by me.

We balked at the prices a bit. Higher than regular burger sets at McDonald’s and Burger King. Naturally so not surprising. However it does remind me that all this ‘awareness’ about things like animal cruelty and environment, well that’s mostly the ‘domain’, the hobby of ‘people with money’, isn’t it? Regular blue-collar folks like myself want to care, but for most it’s like, “Shit, I don’t have time for all that tree-hugging, I can barely make ends meet with the prices of regular food and other expenses these days!” LOL

Remembered to take a pic only after gobbling up half the food.

Oh those brown balls at the top left are like the Malay/Indonesian ‘bergedel’ (mashed potato balls). I remember they were very delicious, but also remember they were expensive at $3.80. Probably not many pieces in the portion then.

Overall a nice experience. And I like the simple and cosy ‘modern country’ decor. 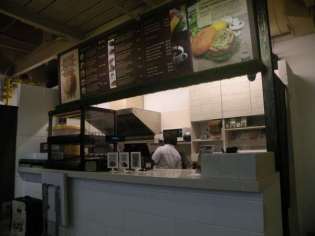 No, I don’t have a super memory. This shot is how I ‘remember’ the prices of the food LOL

4 thoughts on “The hunk of VeganBurg”